Do not leave your most precious objects in the drawer, let them shine with their own light 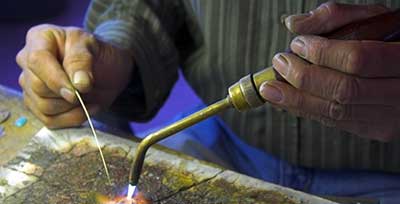 it is a very ductile and malleable metal, a little harder than gold, with a white metallic shininess that is emphasised by polishing. It possesses the highest electrical conductivity among all metals, even higher than copper, which however is more used due to the lower cost.

Pure silver, among metals, also has the highest thermal conductivity, the whitest colour, the greater reflectance of visible light (poor in the case of ultraviolet light) and the lower impact resistance. The silver halides are photosensitive and the effect produced on them by light is the basis of analogue photography (on film and chemical paper).

Silver is stable in pure air and pure water, but darkens when exposed to ozone, hydrogen sulphide or air containing traces of sulphur compounds. In its compounds, silver has an oxidation number of + 1, and is so malleable that can be produced sheets of just 30 μm.

From the city of Sheffield, where it was created around 1742, the material takes its name, which is a metallic material consisting of a copper support and a silver plating.

The name generically identifies a product made with a non-noble metal (e.g. copper or iron) or a metal alloy (pewter, alpaca, brass, etc.), covered in silver. In most cases these are copper or brass surfaces covered with silver by electrolysis. A particular technique in use since the Eighteenth Century is the so-called close plating that made possible to obtain iron or steel items covered in silver.

This technique was not intended to save money on the very high market price of silver, (unlike the more well-known old sheffield plating) but simply to make objects that had, for their particular use, a higher resistance than those in sterling silver.

it is a process of gilding or ornamental decoration used on different materials and with different techniques to embellish an object through the application of a very thin layer of gold, called "gold leaf". Gold substitutes, such as alloys that simulate gold, silver or copper, are less often used. Its main uses are in the production of valuable volumes for bibliophiles, in the decoration of luxury furniture and in art.

Gilding was a very common technique in medieval art and architecture, especially in the Byzantine and Renaissance periods, where gold leaves were used in wooden panel paintings to enhance the visual effect of the halo of the saints, or the shine of the sun: the corrosion resistance of gold has allowed these tables to reach today with unchanged splendour.

There are different gilding techniques, which should not be confused with the plating technique, which involves the mechanical application of a layer of gold measurable in 1 or 2 tenths of a mm of thickness.

is a metal alloy based on copper and zinc, with a prevalence of copper, to which are added, sometimes, various quantities of other elements such as manganese, iron, aluminium, tin, which improve its mechanical properties and resistance to atmospheric agents; with its bright yellow colour, it is used, for its hardness and corrosion resistance, as well as for its easy workability, for artistic objects and common use.

in all likelihood, it is the metal that humanity has been using for the longest time: we can find copper objects dated 8,700 BC. The name derives from the spoken Latin “aramen”, a derivative of the Latin word “aes” which means "copper" or "bronze", names preserved in other languages of Indo-European origin.

Only later is was replaced by the word cuprum, from which the chemical symbol of the Cu element derives. In Roman times most of the copper was extracted from the island of Cyprus, a reality that was underlined with the term “aes Cyprium”, copper or bronze of Cyprus.

In fact, in Roman times there was no difference between pure copper and bronze, its most important alloy obtained with the addition of tin.